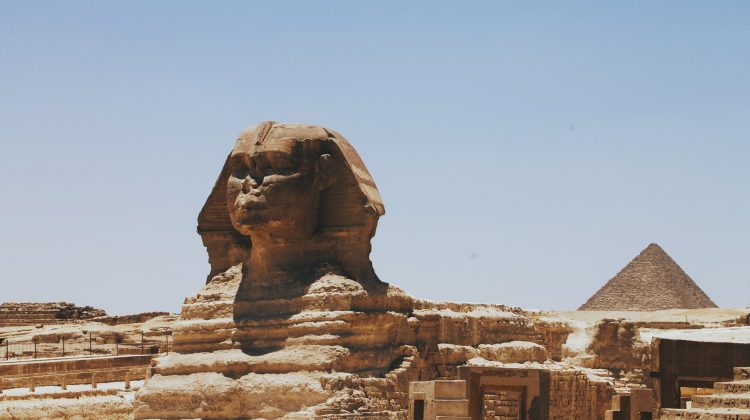 I. Gods and Pharaohs

“Osiris, King of Upper and Lower Egypt, lord of the two countries… son of the Sun, beloved of the gods, lord of the diadems, Rameses, prince of Heliopolis, triumphant! Thou art in the condition of a god, thou shalt arise as Usr, there is no enemy to thee, I give to thee triumph among them…” (Budge, Catalogue, Egyptian Collection, Fitzwilliam Museum, Cambridge.)

Thus reads the inscription around the edges of the cover of the stone coffin (sarcophagus) holding Rameses III, an Egyptian monarch of the 20th Dynasty who ruled between the years of 1187 and 1156 BC . The relief on his sarcophagus shows Rameses between the goddesses Nephthys and Isis. Rameses is wearing distinctive symbols of the three gods of the Egyptian system: he carries the two scepters of Osiris, the god of the dead as well as of renewal and rebirth, on his head are the horns of the cow goddess Hathor, and also the sun ball and feathers of Ammon Ra, who was the supreme god of Egypt until 663 BC. According to historian-writer H.G. Wells, “He is not merely wearing the symbols of these gods as a devout Babylonian might wear the symbols of Bel-Marduk (the chief god of Babylon); he IS these three gods in one.”

A king of Egypt is commonly referred to as Pharaoh, which comes from the Egyptian word meaning “great estate” or “great house”. Originally, this term was used in reference to the royal palace as an institution but eventually it designated the living king himself. The Egyptians had a profound reverence for their kings, as illustrated in the above inscription. The Encyclopędia Britannica states that the “king was a god…he manifested the gods on earth”. This god-king concept had its roots in the pre-dynastic Egypt which, according to current scholarship, would be before 2925 BC. (The dynastic period of native Egypt is divided into 30 dynasties, following the account of a Greco-Egyptian writer Manetho, of 3rd century BC.) During that period, the falcon became the basic symbol for the king and it eventually became the royal Horus name, this was the first element in a king’s high position since it presented the living king as the incarnation of the god Horus, the sun-god and chief deity of the Egyptians. The Pharaohs would later add the god’s name to their titles. This made the Pharaohs more influential than the rulers of other kingdoms, for they were esteemed as higher than kings and priests, they were gods. We do not know how they got to that position, but no other king could induce his people to do feats such as the massive construction of the pyramids.

In the fall of 332 BC Alexander the Great, with his mixed army of Macedonians and Greeks, invaded Egypt, which at this time was under the oppressive yoke of the Persians. The Macedonian general was welcomed by people who were more than happy to be loosened from their enemy’s control. This supposed liberation signaled the end, for all time, of the rule of Egypt by native Pharaohs. However, the long history of the 30 dynasties of Egypt, which spanned over 4,000 years, is much longer than the history between the conquest of Alexander the Great and present day.

Egypt was one of the most technologically advanced ancient nations. The masonry of the passages of the Great Pyramid has not been surpassed by any period of history. The book The Outline of History points out that this pyramid is 450 feet high and its sides are 700 feet long. It has been calculated to weigh 4,883,000 tons. “All this stone,” says the book, “was lugged into place chiefly by human muscle.” Such building projects exhausted the resources of Egypt and often “left her wasted as if by a war”, and not surprising, for it would be a major challenge even in our modern day. The building of the great pyramids took place during the 4th dynasty (c. 2565-c. 2465 BC), a time of great wealth and splendor, when the Pharaohs were obsessed by a passion for making monuments to glorify themselves that no men have ever before or since had a chance to display or gratify. The precursor of these pyramid projects was the Step Pyramid at Saqqarah by Djoser (Horus name Netjerykhet) of the 3rd dynasty, and also other pyramid building projects have been recorded since, but none were as immense as those of the 4th dynasty. But why were such structures built? Where they simply to be symbols of the Pharaoh’s power?

The pyramids were gargantuan residences for the royal dead, particularly the Pharaoh himself. The permeating religious teaching was that of reincarnation or transmigration of the soul. Even though the soul was thought to be immortal, the Egyptians felt that the human body had to also be preserved so that the soul may return and use it on occasion. For this purpose they embalmed, or mummified, their dead and placed them in a tomb inside a pyramid, which was refered to as the deceased’s “home”. To prepare for the afterlife most of the deceased’s internal organs were removed, then the body was sterilized and dried up by being stuffed, inside and out, with natron salts. About 40 days later the body was wrapped in linen strips, affixed in a series of wooded cases and an outer stone coffin (sarcophagus), and laid in a crypt in such a way that it would face east to greet the rising sun in symbolic rebirth. The removed organs, such as the lungs, stomach, intestines, and liver, were placed inside what are known as canopic jars, decorated with paintings or reliefs of the four sons of Horus. The canopic jars were buried with the mummies.

As Egyptologists discover more buried artifacts and mummies, the world of ancient Egypt comes back alive. And, hopefully, while we read and learn about that world of the past, we learn and discover something about ourselves and humanity in general. Chiefly, the inherent desire for life and the pursuit to somehow evade, or at least explain, death.

Did you know…
-We frequently associate people riding on top of camels with Egypt, however, there were no domesticated camels in Africa until after the Persian conquest of Egypt, and the camel was not used as a beast of transport until the Arab invasions of the seventh century AD, long after the zenith of the Egyptian kingdom
– In the movie Mummy, very lightly peppered with Egyptology fact, an Egyptian high priest is mummified, comes back to life to carry out an ancient curse, during which he reproduces the ten plagues. Although it makes for some nice special effects, this is in opposition to what is known of the Egyptian religion. Each of those ten plagues was a direct blow against the individual gods of Egypt (it exposed them as being impotent), the last one was an especially devastating blow since it meant the death of the firstborn of Pharaoh’s sons, the heir to the throne. To the Egyptians it meant the death of a god.
– The longest reign in history by a monarch is attributed to a Pharaoh named Pepi II who reigned for 94 years, during the 6th dynasty.