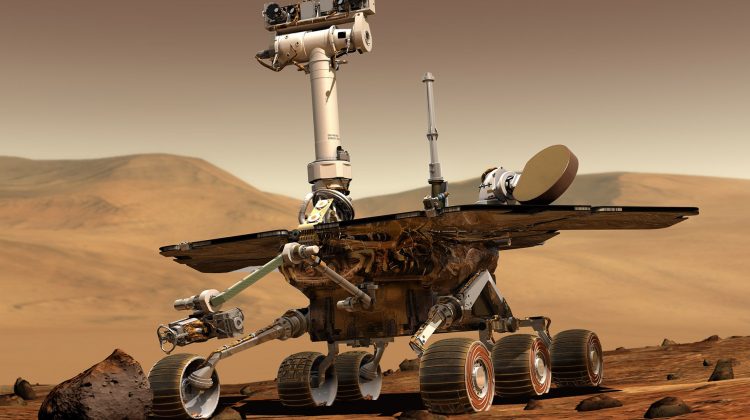 To the Babylonians it was Nergal, a god of death and pestilence. To the Egyptians it was Har Decher, the Red One. The Greeks called it Ares after their god of war, while the Romans called it Mars. This blood-red colored planet intrigued mankind for almost as long as history has been recorded. Even today countless of books and movies have entertained millions on the subject, lighting up vivid imaginations. However, how much do we really know about this heavenly body? Is there life on mars, or has there ever been life there?

“Mars was an enigma to ancient astronomers, who were bewildered by its apparently capricious motion, sometimes direct, sometimes retrograde, across the sky”, says Encyclopedia Britannica. In 1609 Johannes Kepler used Tycho Brahe’s observations to test his laws of planetary motion. At a time when the world held to a classical Ptolemaic idea that all orbits are circular, Kepler’s first law assumed the Mars has an elliptical orbit. This revolutionary idea for its time helped pave the way for the modern gravitational theory of the solar system. But it was in 1698 that extraterrestrial life on Mars was first speculated about in Cosmotheros, an exposition by a Dutch astronomer Christian Huygens. In the late 1700s, Sir William Herschel, the British Astronomer Royal, studied Mars using telescopes he built himself. He thought that all planets were inhabited and that there were intelligent beings even on the sun living in a cool area under the surface. Herschel also inaccurately assumed that the dark areas of Mars were oceans and the lighter regions land. He speculated that Martian inhabitants “probably enjoy a situation similar to our own.” Herschel did, however, correctly assume that Mars had a tenuous atmosphere. Then in 1877, Giovanni Schiaparelli described the streaks on the surface of Mars using the term “canali”, which can mean either natural channels or artificial canals. The latter interpretation was wrongly embraced, and a conclusion was drawn that Mars had intelligent life that built a system of canals. This far fetched theory, however, was dropped when, in 1894, Edward Emerson Barnard reported that he has found no evidence of canals. What about our day? What is the general consensus regarding the possibility of life on Mars today?

Today, scientists aren’t looking for Martian men and women walking around on or beneath the planet’s surface, they’re looking for tiny microorganisms. Meteorite ALH84001 found in Antarctica in 1984, and believed to have come from Mars, was investigated by some researchers at NASA’s Johnson Space Center and at Stanford University. In August 1996 it was announced that the potato-size rock contains evidence, but not clear proof, of life on Mars – organic compounds, mineral deposits, and fossilized microbes. The suggestion was that life on Earth may have originated on Mars. However, just about everyone else in the scientific community now agrees that this meteorite contains scarce evidence of life on Mars, insufficient to draw such a conclusion.

Two U.S. probes, Viking 1 and Viking 2, landed on Mars in 1976. The central theme of these missions was to search for extraterrestrial life. “Taken together, the Viking experiments found no persuasive evidence for life on the surface of Mars,” reports Encyclopedia Britannica. “The strongest case against life on the planet came from the complete absence of organic detritus that would have been associated with any Earth-like biota.”

What is the basic element needed in order for life, even small bacteria, to survive? Water. In 1997, the Pathfinder mission beamed back to earth impressive 3-D images of the surface of Mars. When the six-wheeled rover, named Sojourner, came off the lander it saw “a type of rock that forms over millennia as water rounds pebbles and cobbles and deposits them in a matrix of sand and clay” says National Geographic. “That means there was once liquid water on Mars,” according to Matthew Golombek, the project scientist for the Pathfinder mission. “It suggests a very different climate, perhaps one where life could have developed. That raises the questions: If life developed, what happened to it… and if not, why not?” Golombek further concluded, “It just seems that everywhere you look on Mars, you see water. At least the evidence of it.” Well, then, where did it go? “The prevailing view”, notes National Geographic, “holds that most of Mars’s water is frozen – at the poles, underground, or on the planet’s northern plains.” However, since life cannot exist without liquid water, no water no Martian life. If, at some point, there may have been life on Mars, the only way to know for sure is to go and look.