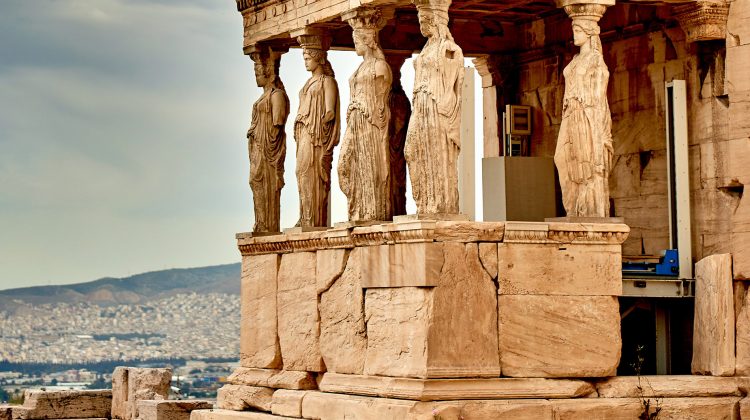 Weddings are to many one of the happiest memories of their lives! For centuries, the very word “wedding” has suggested joy and merriment, family gatherings, and bountiful banquets.

To be sure, each generation and country have had their special customs. But, if one reads about the wedding ceremonies in ancient Greece and Rome, one discovers how little weddings have changed. In fact, we of the twentieth century have borrowed and adopted many of the practices of the early Greeks and Romans.

Since Greece was a country composed of city-states, marriage customs did vary slightly from area to area. Nevertheless, most of the practices were similar.

In ancient Greece men performed all the “outside” or business duties and women the “inside” or household duties. Greek women spent most of their time in their home where they lived separated from the male members of the household. Because a young girl was so protected, her parents chose a husband for her. Girls usually married in their early teens. Parents considered only a man of the same background, socially and economically, suitable for their daughter. In Athens, a marriage was considered legal only if the parents of both the bride and the groom were Athenian citizens.

The favored months for weddings were January and February. However, before a marriage took place, there was a special engagement ceremony which the parents of the bridal pair attended. At this time necessary details were settled, bridal arrangements were made and the dowry (the amount of money the girl’s parents gave the future husband) was determined. In the Greek city-state of Sparta dowries were forbidden by law. In those states where it was the accepted custom, the dowry remained the property of the wife, not the husband. He was allowed to use only the interest received from the dowry. In ancient times, a dowry was a protection for the wife, since at her husband’s death she inherited nothing, but rather had to leave his house and return to her own. There her father accepted the return of the dowry. Should her father be dead, her closest male relative accepted not only the dowry, but also the responsibility of marrying her himself or of finding a second husband for her. Should a girl not have a father or a close relative, a guardian was appointed.

Once all the marriage arrangements had been settled, preparation could begin. Days in advance, sacrifices and prayers were offered in the temples of the gods, especially that of Hera, the queen of the gods.

According to custom, on the day before the wedding, a girl put aside all her childhood toys. On the morning of the wedding day, a female relative of the bride went to a special fountain to fetch water. The future bride then used this water to bathe and to prepare for her special day. A male relative of the groom performed the same duty for the future groom.

To the bride’s father’s house, all family and friends were invited for a great banquet. As was the custom, the women sat by themselves at separate tables, the veiled bride among them. In the evening, the groom came for his bride. To take her to their new home, he brought a carriage pulled by horses, mules or oxen. A procession of family and friends singing a marriage hymn, playing the flute and carrying torches to light the way, preceded the bridal carriage on which were the bridal pair and the “best” man. The bride’s mother carried the wedding torch which she had lit at home. The bride, still veiled, and the groom wore wreaths of leaves and flowers on their heads. In some areas of Greece, when the couple approached their new home, they burned the axle of this carriage, symbolizing the fact that marriage was forever.

At the door of the bridegroom’s house, his mother met them. The doors and doorposts had been trimmed with green garlands. The bridal pair entered after the guests who threw fruits and sweetmeats (candy) at them as a sign of good luck.

Now came the wedding-feast. Sesame cakes, the symbol of a happy and fruitful marriage, were served. Quince (an applelike fruit) was eaten by the married couple to represent the joys of the life ahead.

After the dinner, the bride was led to the bridal chamber by an elderly female relative. During the next two days gifts were sent to the newlyweds. On the third day, the bride appeared unveiled.

Now the final but most important ceremony took place. The groom enrolled his bride in his tribe. This allowed him to have his marriage officially recorded.

Roman weddings were more complicated and elaborate than those of the Greeks. Yet, just as today, the social and financial status of the individuals involved governed the extent of the preparations and the feasting.

In Rome, parents also arranged the marriages of their children; but, the consent of each child was necessary before a marriage could take place. Only children of fathers who were Roman citizens could be citizens. As in Greece, the youth married young, usually in their teens, although boys were generally closer to twenty. Roman girls were trained by their mothers in all household duties for, in Rome, women were not confined to a special part of the house but rather shared with their husbands its management.

Before a marriage could be planned, the families involved had to choose the type of marriage they preferred. Legally, a woman might become a mater familias (mother of the family) and come under the power of her husband. Her property became her husband’s and should she be widowed, she inherited his wealth. Or a woman might become an uxor (wife) whereby she still remained under the power of her father and kept her own property.

As to the actual marriage ceremony, there were three types: confarreatio, usus and coemptio.

Confarreatio was the most elaborate. The bridal pair was brought together by a pronuba, a lady who was still married to her first husband. Before ten witnesses, the bride and groom joined hands and said, “Quando tu Gaius, ego Gaia”. (“Where you are Gaius, I am Gaia” or “Where you are my husband, I am your wife.”) At the left side of the altar they sat on stools covered with the skin of the sheep which had been sacrificed earlier. To Jupiter and Juno they offered a wheat cake made of spelt (panis farreus). A young boy called a camillus carried the utensils needed to cut the cake, a piece of which the bride and groom then ate.

Historians do not know the exact formalities connected with the ceremony known as usus, but it is thought that the bridal couple also held hands and repeated the special words.

The word coemptio means “joint taking.” In this type, the groom, in front of five witnesses and a person who held a set of scales, placed a coin in the scales as a symbol of the “sale” of the bride to the groom. The groom then handed the scales to the bride’s father before asking her to be his wife. In Rome a betrothal ceremony, called a sponsalia, was necessary. At this time the marriage day was set. However, many days were considered unlucky. April and the last half of June were favored. The sponsus, “fiance”, then formally asked his future father-in-law for the hand of his daughter with the words:

As a symbol of their engagement, the sponsus then gave his sponsa, “fiancee”, an iron ring which she wore on the third finger of her left hand.

Before the wedding, sacrifices were offered to the gods, asking their favor and protection.

While custom did not require any special garb for the groom, that of the Roman bride was quite involved.

On the eve of her wedding day, the young bride, just as her Greek counterpart, placed on the altar of her parents’ household gods all her childhood possessions. That night she slept in a tunica recta, a special yellow garment woven in one piece.

On the day of the wedding her mother helped her prepare for the ceremony. Her tunica recta was fastened by a woolen belt which was then tied in a nodus Herculeus, “knot of Hercules.” As only the husband was allowed to untie it, some historians believe this knot symbolized a stable marriage.

Perhaps one of the most intriguing rituals was the parting of the bride’s hair with the point of a spear into six sections which were then braided. Tradition tells us that this was done in memory of that day when the early Romans used spears to capture their Sabine brides. Ribbons and sometimes pearls were laced around each braid. A flame-colored veil covered her head and was held in place by a wreath of flowers which the bride herself had gathered. Her shoes were also flame-colored and sometimes adorned with pearls. The groom also wore a wreath of flowers.

Next, the couple proceeded to a temple or a public altar for the official wedding ceremony (confarreatio, usus or coemptio). Guests wished them happiness with greetings of Feliciter.

In the evening the bride’s father hosted a great marriage feast, cena nuptialis, for family and friends. Tradition says that the giving of a piece of mustaceum, “wedding cake”, to each guest signaled the end of the meal.

Pretending to use force, the groom took his bride from her parents’ home to their new home. As in Greece, a torch-lit procession of the guests accompanied the bridal pair to their new home. Before the pair walked a flute player and a young boy holding a torch of white thorn wood to avert all evils. Behind the bride was another boy who carried thread and a spindle. As they walked, the groom threw walnuts and sesame cakes to the boys along the way, symbolizing the fact that he had now laid aside all his childhood toys (in ancient times, nuts were used in place of marbles).

The Romans believed that Juno, their patroness of marriage, accompanied the bride on this walk.

When the couple reached their new home, the bride smeared oil and fat on the doorposts as a sign of a prosperous future. Woolen pieces of cloth were then wound around the doorposts to symbolize the bride’s future household duties. Some say the groom entered the house first and invited the bride to enter. Others say that the groom, to guard against the bride’s stumbling, an unlucky beginning, carried his bride over the threshold. Once inside, he offered her fire and water, the symbols of domestic life and worship. The young bride again spoke the words, “Ubi tu Gaius, ego Gaia,” and became part of her husband’s family.

The bride then took the white thorn torch, which had been carried before her in the procession, and kindled the fire in her new home. To end the day’s festivities, this torch was thrown to the guests. Traditionally it brought good luck to the person who caught it.

On the following day, the new husband invited all the relatives and friends to a repotia, “marriage feast.” Presents were brought at this time.

In both Greece and Rome, since marriage and the rearing of children ensured the continuance of their countries, every citizen felt it his religious and patriotic duty to marry and raise children.