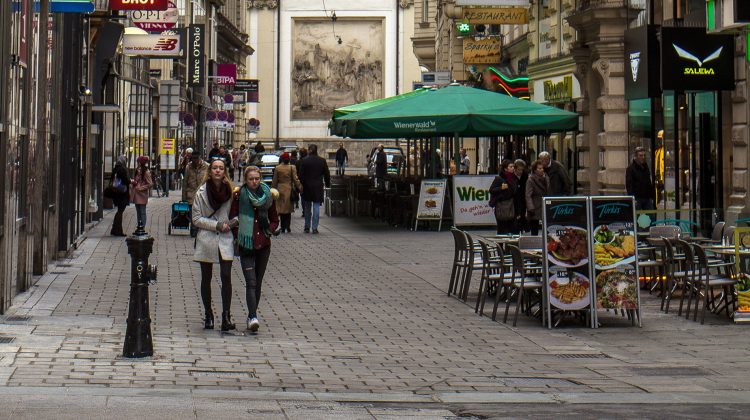 Once the residence of the Holy Roman Empire and the capital of the Austro-Hungarian Empire, Vienna survived two World Wars with its flamboyant fatalism intact; for instance, even today mannequins in black dance on a memorial that celebrates the end of a 17th century plague. The Macmillan Encyclopedia points out that the 18th and 19th century Vienna became an important political and cultural center, “having associations with many composers, including Haydn, Mozart, Beethoven,” (who touchingly inquired of a friend just before dying: “I had a certain talent, hadn’t I?”) The encyclopedia went on to list “Schubert, and the Strauss family.” To the list of conductors we can also add, those that resided there in the late 19th century: Brahms, Mahler, Schoenberg, in addition to Freud, an Austrian psychiatrist and pioneer of psychoanalysis, and Schnitzler, an Austrian Jewish dramatist and novelist, Theodor Herzl, the founder of Zionism, and others. It is no wonder then that, as for ideas, The New Encyclopędia Brittannica calls turn-of-the-century Vienna “a fertile breeding ground for ideas that – for good or bad – were to shape the modern world.”

A city in northeastern Austria, Vienna is the capital and largest city of the country. It is central Europe’s easternmost city with a Western outlook. Running through Vienna is the Danube River, once established as the frontier of the Roman Empire in the 1st century AD. To the west you see the foothills of the Eastern Alps, and to the east the plains of the Denube Basin. The climate is continental. The heart of Vienna is the Innere Stadt (Inner City), which is encircled by a great boulevard, the Ringstrasse, created in the latter half of the last century, when the city walls were torn down. It is decorated with imposing buildings: the parliament building looks like a Greek temple; the city hall, like a Flemish Gothic guildhall; the university, like an Italian Renaissance palace; the State Opera House, in the amusing words of Mr. John J. Putman of National Geographic, like “a wedding cake on a platter”. A story goes that so criticized were the architects of the last one that one committed suicide, but now, of course, everyone in Vienna loves the building.

In addition to being among the undisputed cultural centers of the world, rich in opera houses, theaters, museums, historic homes, and libraries, Vienna for centuries has been famous for its coffeehouses. The first coffee house in central Europe was opened in 1683 by a spy for the Viennese who, according to The People’s Chronology, “has tasted coffee in his sallies among the 300,000 Ottoman siege force and had obtained some bags after the Turks’ retreat.” His coffee house is called Zum Roten Kreuz (At the Red Cross) and is located near St. Stephen’s Cathedral. By 1842 Vienna had some 15, 000 coffeehouses. Today, however, that number has dropped to approximately 1, 700 (particularly due to the two world wars). This, though, does not curtail the coffee culture in Vienna and its influence on the world. Why, a good dark coffee bean is known all around as a “Vienna” roast. If you were to visit a Viennese coffee house today, some of the choices offered to you would be: Mokka, a plain black coffee, Maria Theresia, black coffee with orange lacquer (named after the Austrian Empress), Einspanner, black coffee with whipped cream, Brauner, black coffee with some milk in it, Kapuziner, coffee with milk and whipped cream, Kaisermelange, kaiser with yolk and honey, Franziskaner, melange with whipped cream and chocolate flakes, Verlangerter, black coffee diluted with water, and Fiaker, Velangerter with rum and whipped cream, and others.

Whether you have an opportunity or not to visit Vienna and its many coffeehouses, the Viennese history, art, and culture (particularly the coffee culture) can inspire, or at least enhance, your own special coffee brew, as well as other creations and endeavors.